The Asia-Europe Meeting (ASEM) is an informal process of dialogue and cooperation bringing together the 28 European Union member states, 2 other European countries, and the European Union with 21 Asian countries and the ASEAN Secretariat. The ASEM dialogue addresses political, economic and cultural issues, with the objective of strengthening the relationship between our two regions, in a spirit of mutual respect and equal partnership. 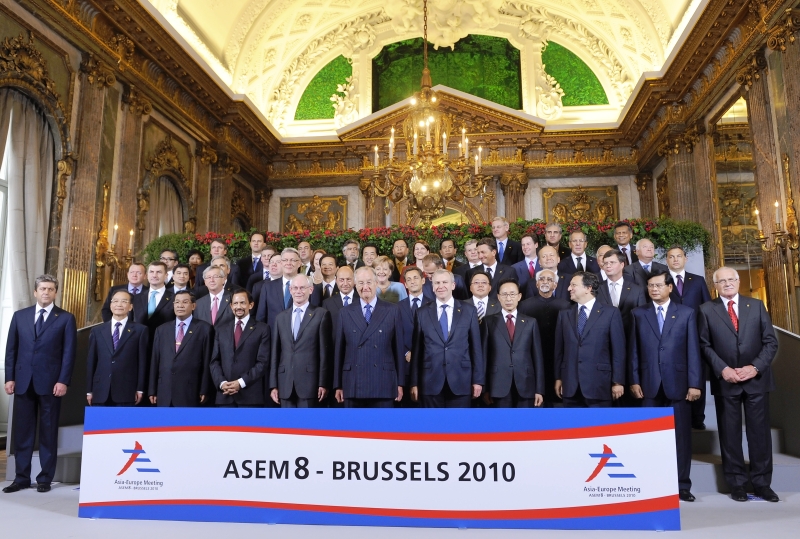 The initial ASEM partnership in 1996 consisted of 15 EU member states and 7 ASEAN member states plus China, Japan, Korea and the European Commission.

The second round of enlargement in 2008 during the 7th ASEM Summit in Beijing (China) brought in 6 new members: Bulgaria, India, Mongolia, Pakistan, Romania, and the ASEAN Secretariat, increasing total ASEM membership to 45 partners.

In October 2010, the 8th ASEM Summit of Heads of Government and State in Brussels (Belgium) welcomed 3 new member states to the ASEM process. (Australia, New Zealand, and Russia). This third round of enlargement increased total ASEM membership to 48 partners.

In November 2012, during the 9th ASEM Summit of Heads of Government and State in Vientiane (Lao PDR), Bangladesh, Norway, and Switzerland officially joined. This round of enlargement brought total ASEM membership to 51 partners.

The latest round of enlargement during the 10th ASEM Summit in October 2014 in Milan (Italy) welcomed Croatia to the European side, and Kazakhstan to the Asian side. This brings the total ASEM membership to 53 partners.

As an informal process of dialogue and cooperation, based on equal partnership and enhancing mutual understanding, ASEM can best work to facilitate and stimulate progress in other fora, and should not seek to duplicate what is being done within bilateral and other multilateral relationships with Asia.

Key characteristics of the ASEM process include:

Informality:
It provides a open forum for policy makers and officials to discuss any political, economic and socio-cultural issues of common interest. In this way, it complements rather than duplicates the work already being carried out in bilateral and other multilateral fora;

Multi-dimensionality:
It covers the full spectrum of relations between the two regions and devotes equal weight to political, economic and socio-cultural dimensions;

Emphasis on equal partnership:
It eschews any “aid-based” relationship taken forward under our bilateral relations in favour of a more general process of dialogue and co-operation based on mutual respect and mutual benefit;

Dual focus on high-level and people-to-people:
It provides a platform for meeting of heads of states or governments, ministers and senior officials, and with an increasing focus on fostering contacts between societies in all sectors in the two regions.

Asia-Europe Foundation (ASEF)
ASEF is the only permanently established institution of ASEM and is funded by voluntary contributions from its member governments and shares the financing of its projects with its civil society partners across Asia and Europe.
> learn more