KYAS ART SALON, the first SALON D’ART in Amsterdam will open its door on 15 November 2014 at Keizersgracht in Amsterdam

Kaoru will host and curate various events focusing on the international art scene where art is moving. The KYAS ART SALON will be an exclusive art club with top artists, musicians and cultural related people. The essence will be inviting guests to a new style of presentation of art and culture. It is all about being there, where you desire to be, the artist himself shows his work, musicians will perform, special food and drinks will be served. Each event will take place in a beautiful space located in the heart of Amsterdam, Unesco Heritage Area.

Kaoru Yamamoto was born in Kyoto, Japan, graduated at Tama Art University in Tokyo. In 1991 she started her computer graphic art studio “Kaoru Yamamoto Art Studio” in Osaka. After several international exhibitions, she was invited to exhibit in Amsterdam and stayed ever since broadening her horizon. In 1996 Kaoru started the first Internet art gallery in The Netherlands introducing Dutch artists worldwide. By organizing the event and exhibition ‘DEJIMA 2000’, for the occasion of 400 years anniversary Holland – Japan relations, Kaoru being an artist herself, introduced acclaimed Dutch painters to Japan. She produced the music and video album ‘Kyo-onna In My Heart’ which was introduced at KLM inflight entertainment in 2012. In the meanwhile she was performing as a VJ and organizing amazing parties. One of her recent activities is exposing at international art fairs to introduce her work and that of other artist’s worldwide. Kaoru Yamamoto has a name being a forerunner in art and culture. 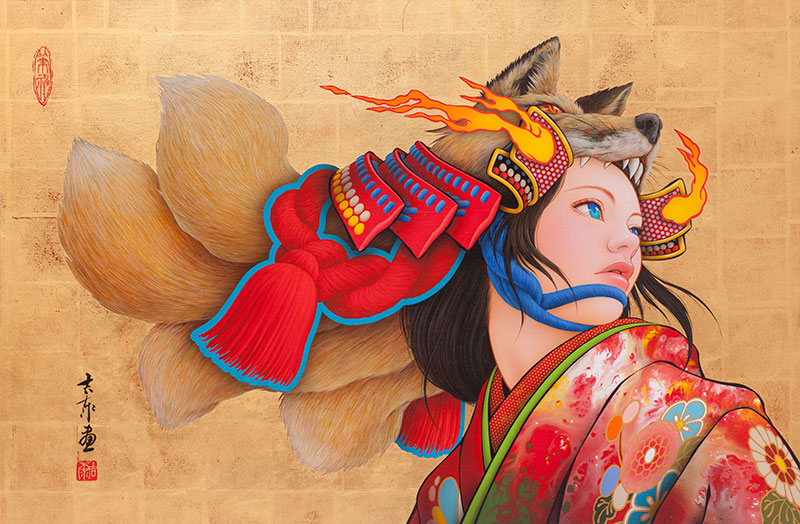 Yoshiyasu Tamura is the Japanese Manga Maestro. As artist in residence Tamura will be staying for one month at KYAS ART SALON, producing his Manga Fine Art everyday! He also welcomes YOU to create a manga style portrait during the opening for YOU! 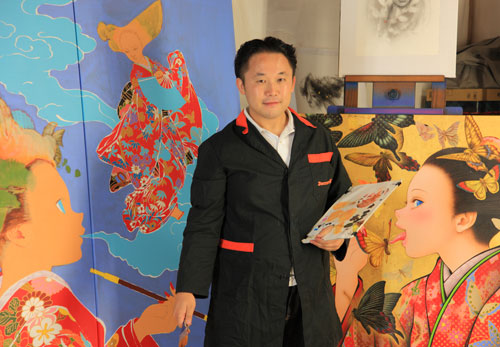 Information about the Artist: YOSHIYASU TAMURA

Mangaka, illustrator, painter. Born in Gunma, Japan, in 1977.
Since high school he has been involved with drawing cartoons and he soon signed a contract with publisher Shueisha.
In 2003 his first manga, Fudegami (JUMPCOMICS, Shueisha) was published in a very popular monthly magazine called ‘Gekkan Shonen Jump’.
Tamura also works as a painter, inspired by western art. His first solo exhibition titled ‘Genesis – Paintings by Yoshiyasu Tamura’ was in 2008. In 2011 he had an exhibition at the ‘Nihonga ZERO’ (Hidari Zingaro, Kaikaikiki) under the supervision of Takashi Murakami. At the same time he started to exhibit internationally at art fairs, such as Mexico City, Basel, Taipei, Los Angeles, New York and Poznan. In 2013 he has been invited to cultural events in Siena, Lucca, Lisbon followed by a European tour with his works. After showing his talent in various countries, he received invitations to give workshops at festivals and comic schools. His workshops always have been very popular. In 2014 Tamura had a solo exhibition at Palazzo Medici-Riccardi in Florence. This year Tamura received his assignment with fashion brand ‘McQ Alexander McQueen’ for the 2014 fall/winter women’s collection.